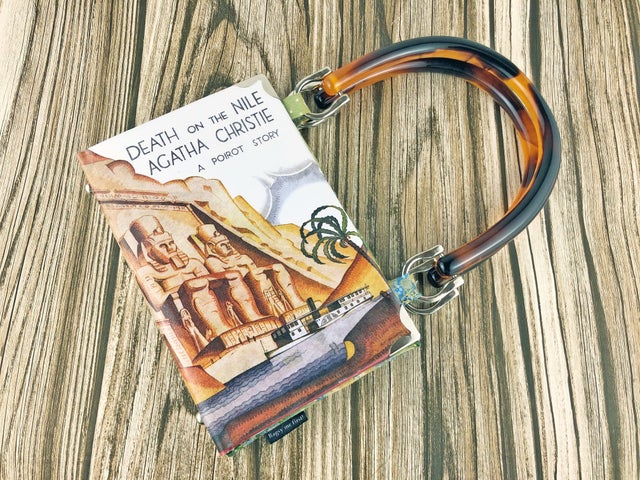 'Death on the Nile' by Agatha Christie was first published in 1937 by the Collins Crime Club when it sold for the princely sum of seven shillings and sixpence.

Here's a secondhand facsimile edition of the original, published to mark the 80th anniversary of Poirot's first appearance - and one of his most infamous cases. The front cover is a softly-drawn Art Deco-style illustration of ancient Egyptian tombs towering over the Nile tour boat on which the story unfolds, and the crisp white back cover is choc-full of glowing reviews.

I've fixed the dustwrapper to the book boards with clear film and added shiny chrome book corners and feet. It swings from amber-coloured resin handles - and although I don't have any of the ones in the listing left - I do have some other very pretty amber handles that'll be just the job. It closes with a button (will vary) on a tab with a fabric loop. The book measures a dainty 127mm x 189mm x 26mm (4.9" x 7.4" x 0.9") and is lined with the fabric of your choice. There's a pocket for cards trimmed with a tiny silver-plated 'revolver' charm and a larger pocket for your mobile phone tucked under a softly-padded flap.

“It often seems to me that's all detective work is, wiping out your false starts and beginning again." Yes, it is very true, that. And it is just what some people will not do. They conceive a certain theory, and everything has to fit into that theory. If one little fact will not fit it, they throw it aside. But it is always the facts that will not fit in that are significant.”

Agatha Christie 'Death on the Nile'